As unionized workers, we have the advantage of being able to bargaining collectively. As a result, members of all three units of CUPE 3906 have access to paid sick leave, regardless of citizenship status, enshrined in their respective Collective Agreement. However, millions of workers across Ontario do not have access to job-protected, employer-paid sick days, and the Covid-19 pandemic has revealed just how dangerous that is. When workers don’t have access to paid sick days, they go to work sick because they’re afraid of getting in trouble or because they won’t be able to afford to pay their bills. They get their co-workers sick. They get customers sick. When those people eventually turn up at clinics or hospitals, we all pay the cost. As we’ve seen in the context of Covid-19, the consequences can be devastating.

Workers shouldn’t have to choose between staying home when they feel sick and being able to pay their rent, and it shouldn’t be up to individual employers to decide whether or not their workers get paid sick days. We need paid sick days guaranteed to every single worker across the province, paid for by employers. We can’t wait any longer. In 2018, workers in Ontario won a statutory minimum of two paid sick days, but one of the Ford Government’s first acts in power was to take them away.

In response to growing pressure at the peak of the third wave at the end of April 2021, the Ford Government announced a new WSIB program that would allow workers to take up to three days of paid leave, to a maximum of $200, in order to get tested or vaccinated. Not only is the leave being paid for by taxpayers rather than big employers, but it is a temporary program that will expire in September, and it could in fact leave some workers worse off; read an analysis of the program by the Decent Work and Health Network here. 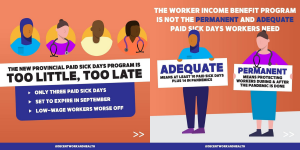 At the same time, the Ford Government began publicly campaigning to blame migrants, including international students, for the crisis, deflecting attention from their own utter mismanagement of the situation with textbook racist scapegoating. CUPE 3906, CUPE Ontario, and the CUPE Ontario University Workers Coordinating Committee stand in solidarity with international students, many of whom are our members and coworkers, and we will resist attempts to blame them for the crisis with every tool at our disposal. Join us in calling on the Ford Government to Stop the Scapegoating!

To show your support for paid sick days for all, visit the Decent Work and Health Network campaign website and use the form to send a message to the government demanding at least 10 permanent paid sick days per year and an additional 14 sick days during public health emergencies.

Interested in joining your co-workers in taking action to demand paid sick days for all? Let us know!

The Myths and Truths About Paid Sick Days View

“How to Slow the Spread” Poster View 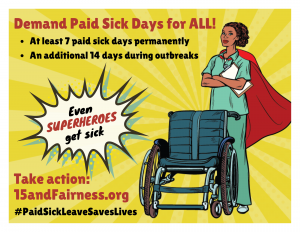