Grievances, Your Union, and You

CUPE 3906 has existed for almost 40 years. In those years of struggle with our employer we have gained many rights and benefits. Many of these rights and benefits are protected by our Collective Agreements which is a legal document that state the common ground between 3906 and McMaster University.

When these hard-fought agreements are violated, a member has the right to file a grievance, which means making an official complaint, one that our Employer has to address in one way or another.

One of the most important things about being in a union is that it’s never just you filing a complaint. This is never a ‘one on one’ process. Every step of the way you have the right to union representation, and CUPE 3906 investigates every complaint that is made one of its own. 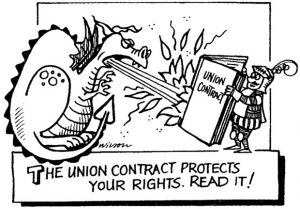 Working through the Chief Stewards, members of the Grievance Committee, and our Staff, CUPE 3906 follows through on grievances which have been filed by Members. If you think you have a grievance, you should talk to your steward or any member of the executive and/or staff who will be able to help answer your questions.

What is a grievance?

A grievance is an official complaint about the way the Employer interprets, applies, or administers the Collective Agreement. This ranges from the Employer claiming a particular understanding of a certain procedure all the way up to simply ignoring what has been agreed to. A grievance can also be a complaint about harassment or discrimination that you face at the University.

CUPE Local 3906 can file a grievance on behalf of any of its members, and the Employer is bound by the agreement to act reasonably and non-discriminatorily in response to a grievance.

Often, it’s not just one Union member that is affected by what our Employer does – sometimes a number of members are affected by the actions of a particular supervisor or chair, and often the Employer will violate agreed-to procedures across many departments and faculties. In these instances, the Union can file what are called group and policy grievances and seek redress for many people at once. These sorts of grievances are often filed because Members let stewards and staff know what is happening, so it’s important to bring all problems you see to Union executives and 3906’s Staff.

In most cases, a grievance can be withdrawn at any time and doing so will not affect future grievances.

What types of things do 3906ers grieve?

Across all bargaining units, an important type of grievance that 3906 files has to do with harassment, discrimination, and accommodation issues. In fact, CUPE 3906 just recently settled a pay equity grievance with the employer which resulted in a meaningful resolution for many female post-doctoral fellows in the Faculty of Science. While the Employer might send you to resources put in place to assist with these issues insofar as you are an academic, these issues also pertain to you as an employee which can be resolved with the help of the Union. One advantage of taking this route is that Union reps can go to meetings on your behalf, which is important for certain kinds of harassment and discrimination. In addition, the Union can often get stronger resolutions to problems because of its legal status.

Common grievances are related to workload – being asked to work more hours than are agree to in the Collective Agreement. In order to agree on how these hours will be used, every TA and RA should have a meeting with their supervisor before they start working. If after a few weeks of working you find that there’s just too much to be done in the time allotted, you should alert your supervisor so they can find an accommodation. This can include a reduction in workload or extra monetary compensation.

Common grievances in Unit 2 are related to hiring and seniority. For example, if you are not hired for a position for which you have seniority, you may want to pursue a failure to hire grievance.

In Unit 3, many of our grievances stem from the improper or unsupported termination of our members. If you are facing disciplinary actions by your department with relation to your employment, it’s important that you reach out to the Union to make sure you are receiving as much support, assistance, and advocacy as possible.

What are the limits of the grievance process? Making it political
The grievance process can be effective when there is a clear violation of the CAs, but many of the things that our Employer does are clearly wrong in spirit but not always recognized as such in the eyes of the law or protected against in the collective agreement.

This discrepancy is why it is so important to speak with your stewards, the executive, or the staff if you are dealing with distressing, harmful, or unfair conditions at work. If it turns out that we are not able to grieve the issue, we can still address the issue in bargaining by securing language that does protect against it.

In bargaining years, that means being an active participant in the bargaining process. At all times – bargaining years included – member engagement and direct action are our friends. This in effect means making the grievance process more overtly political. Remember that the grievance process is already a collective one with Union as a whole treating each grievance as its own. Adding direct action to this process means getting more and more 3906ers actively involved, thereby putting pressure on our Employer to do the right thing.

Creating new ways to pressure our Employer to treat us well is just as important as exercising the processes that we’ve invented in the past. Remember that our first agreements only included wages and a long outline of our Employer’s rights to treat us as they wish. One of the most effective ways of gaining more protections in our Collective Agreements is to continue our inventiveness in the future.