What is collective bargaining?

Collective bargaining is a process in which a trade union and an employer negotiate a first collective agreement or the renewal of a previous collective agreement. At CUPE 3906, the Union’s bargaining team is made up of members who are elected to the position at General Membership Meetings (GMMs). The parties usually focus on such issues as wages, job security, working conditions, grievance procedures and benefits. In an university, academic issues- such as academic freedom – are in important bargaining issue.

What is a collective agreement?

A collective agreement is a written contract of employment covering a group of employees who are represented by a trade union. This agreement contains provisions governing the terms and conditions of employment. It also contains the rights, privileges and duties of the employer (McMaster), the trade union (CUPE 3906) and the employees (TAs/RAs in lieu and Post-Doctoral Fellows).

What is the role of an ordinary member in the collective bargaining process?

The most important thing a member can do during bargaining is to stay informed of what is happening. Your bargaining team produces regular updates and holds information sessions, watching for these in your workplace helps keep you in the know. In early 2019, members also completed the bargaining survey to ensure that they had an impact on the bargaining agenda.

Beyond staying informed, members can be involved in many ways. You could volunteer to be a member of the bargaining support team. A member could also volunteer to organize members in their workplace through lunch time meetings and actions in the workplace.

What happens if, during negotiations, the employer and the union cannot agree on the terms of a collective agreement?

Either the employer or the union may ask the Ontario Minister of Labour to appoint a conciliation officer. This officer will then try to help them reach an agreement.

Conciliation is a process by which a trade union or an employer can ask the Ontario Ministry of Labour for help in resolving their differences so that they can reach a collective agreement. Either party may apply to the ministry. If parties are in negotiations, they must use, the government’s conciliation services before they can get into a position to engage in a strike or lock-out

Sources:
Professional Institute of the Public Service of Canada

Bookmark our bargaining website bettermac.ca and visit regularly for updates and more information. 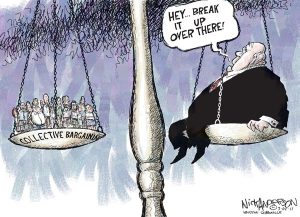