It has been a few long months of negotiation and research for our CUPE 3906 Unit 2 Bargaining Committee. As you have likely heard through our ongoing phone calls and personal emails, we left the table in August with a request for more detailed information from the Employer to draft proposals that comply with what is commonly referred to as “Bill 124”.

Bill 124 refers to the Ontario Conservative Party Government’s restriction to increases to wages and other Collective Agreement entitlements to a maximum of 1% per year over a 3-year “moderation period”. Unit 2 has already been through one year of these restrictions, and we have two years remaining under the legislation (i.e., until September 2023). The legislation also restricts unions’ abilities to “make up” for the three years of restrictions in the year following the restriction period. (It is unclear what exactly is prohibited under this portion of the legislation.) This legislation makes negotiating meaningful improvements in the first two years of the Collective Agreement extremely difficult.

The Bargaining Team has spent weeks trying to maximize the gains in years 1 and 2 in creative ways, and offering proposals in year 3 that take into account the consequences of inflation and underfunding in several benefits. Items such as improvements to job security cost the employer nothing, but they continue to say ‘no’ and seem content with the current level of precarious work.

Even our proposals that deal with equity between Sessional Faculty and other employees on campus—such as recognition for our members who have been teaching for five, ten, and even thirty years or more—have not
been adopted by the Employer. We met with the Employer again on December 6th and 9th, 2021, with a modified package of proposals to attempt to meet the employer’s proposals partway, but unfortunately the Parties were not close in key priority areas such as Job Security, Wages, and Retirement Security.

The employer continues to say ‘no’ to improvements to job security, ‘no’ to meaningful retirement security, and insists on keeping wage increases to a minimal level that falls well below inflation. We are continuing to negotiate, but we are getting to the end of what can be negotiated without arriving at an impasse. In the event that the Parties reach an impasse, the Bargaining Team may request a Strike Vote from Members.

A strong Strike Vote gives the Bargaining Team the option of calling a Strike in the event that talks break down entirely at the table. It does not automatically lead to a strike, but demonstrates that the Union and its members are serious about their proposals in the process of Conciliation (or else the Employer “holds all of the cards”). Conciliation is a process involving an authorized third-party Conciliation Officer who attempts to guide the Parties to an agreement. If an agreement is not achieved during Conciliation, either Party can file a “No Board Report”, which is a document filed with the Government that starts a 17-day countdown to a legal strike by the Union or a lockout by the Employer.

The Bargaining Team anticipates more bargaining dates in the Winter Term and we are asking for your continued support. It is necessary to achieve an improved Collective Agreement that you deserve. Without your demonstration of support, it is unlikely that we will be able to negotiate anything other than a “roll-over” agreement for the next few years. We think you deserve more in wages, benefits, resources, and retirement planning. We think that you deserve to be treated in a way that is more equitable with other instructional staff on campus. The Employer will need to hear your voices united in this demand in the coming weeks.

A PDF version can be found here 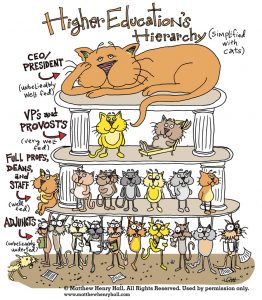