As McMaster Proposes Capping Our Annual Wage Increases at 1%, Senior Administrators Vote to Give THEMSELVES “Merit-Based” Bonuses of Up to 3%

CUPE 3906 made quite the splash at McMaster’s Board of Governors’ meeting last Thursday. In the days prior we had sent the BoG this open letter, and for the first time, our demands were added to the agenda. Several 3906 members attended the open session of the meeting, and the EGS also submitted an open letter to the BoG in support of our bargaining priorities.

Our President, Nathan Todd, addressed the Board directly and demanded that they immediately mandate the University’s bargaining team to secure a contract that addresses our members’ concerns. Not long after, in what might seem like some sort of cosmic joke were it not so infuriating, the BoG approved the implementation of “merit-based” lump sum bonuses of up to 3% to some of the highest-paid members of “The Management Group” at McMaster. These TMG members, a number of whom also sit on the BoG, fall into pay bands ranging from $98,581 to $201,075 – more than most 3906 members could hope to take home over several years.

When our VP External, James Watson, stood up to challenge the Board on how these bonuses would comply with the 1% wage cap in Doug Ford’s Bill 124 should it pass, we got crickets in return. 🦗🦗🦗 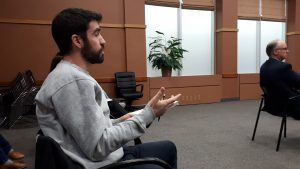 This 1% cap amounts to about half the rate of inflation in Hamilton. As the cost of living continues to rise, we know that our members cannot afford further de facto pay cuts. And while we have pushed the Employer to quit negotiating within the parameters of this bill that is not yet law, they continue to act as though their hands are tied. But we’re onto them!

We read the the agenda/minutes from Thursday’s full meeting to find that the BoG decided to give themselves recourse to these 3% pay bonuses because *gasp* Bill 124 is not a law: “Please note that [the bill] is currently before the Ontario legislature, and is being closely monitored. To the extent that Bill 124 or other compensation restraint legislation gives rise to new regulatory requirements that impact this document, it will be amended to ensure compliance” (pg. 348).

Basically, while the BoG acknowledges Bill 124 as a possibility, they are willing to change things retroactively for themselves to be compliant with the law. For 3906 members, though, the University refuses to entertain the idea of negotiating within the bounds of current legislation only.

More about the University’s audacity on the matter of wages to come, so stay tuned! For now, we strongly recommend listening to the latest episode of CUPEcast, which covers the BoG meeting, Bill 124, and the implications of the recent federal election for CUPE 3906. We are incredibly grateful to our Physics and Astronomy Department Steward, Adam, for creating such a valuable resource for our members.