Hamilton, ON— Over the past four days, CUPE 3906 (Unit 1) members have provided their bargaining team with a clear strike vote mandate and in so doing have sent a strong message to McMaster: bargain the fair contract that TAs and RAs in lieu deserve. Membership turnout for this vote was the highest in living memory, with 87% voting to authorize strike action, if necessary. These results highlight the importance of the issues at stake to the membership.

The union’s bargaining team is heartened and motivated by the support that an 87% ‘YES’ result represents. The outcome of this vote illustrates a real commitment to the needs identified by the membership, including paid pedagogical and anti-oppression TA training, strengthened graduate guarantees, equitable wages between undergraduate and graduate TAs, better representation for Indigenous members, an increase to the minimum number of hours on a contract, and protection against tuition increases. Having heard the collective voice of our membership, the union is empowered to bargain a fair Collective Agreement for a #BetterMac and deliver real gains to TAs and RAs in lieu.

The results of this vote do not mean that a strike is forthcoming, but do empower the bargaining team to call a strike should negotiations not provide meaningful gains to members. The next step in the bargaining process is conciliation, in which a provincially appointed conciliation officer will meet with the parties.

Local 3906 will put the support of its members into action at the bargaining table and are committed to membership engagement throughout the process. Keep an eye out for our updates and additional bargaining support initiatives. 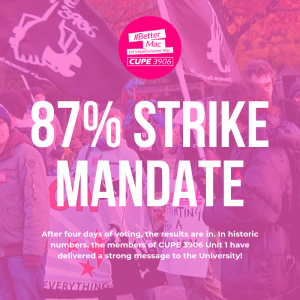