Dear TAs/RAs in lieu and Postdocs,

As you’ve likely heard already, your Collective Agreement expires on August 31, 2019 and your elected bargaining teams are preparing to negotiate a new and improved agreement over the summer months. Before they can do that, we need to hear from you!!! Our bargaining proposals are based on the priorities you identify. We’ll be releasing our bargaining survey on Wednesday, February 6th and having Bargaining Survey Launch Tour to support it and reach out to members. We’ll be making three stops around campus and we’re hoping you’ll drop in to one of them for some free pizza and to fill in the survey. The dates and locations are:
Wednesday, February 6th- MDCL 3023- drop in anytime between 11:30 and 2:30
Tuesday, February 12th- ETB 230- drop in anytime between 11:30 and 12:30**
Thursday, February 14th- TSH B129- drop in anytime between 11:30 and 2:30
**A General Membership Meeitng will occur in ETB 230 from 12:30 to 2:30, so we’ll be on hand between 11:30 and 2:30. This meeting will feature the election of a Vice President, Unit 1 Chief Steward, and Recording Secretary**
In addition to the free pizza, anyone who comes to one of these drop-ins will be given a ballot to win a $100 grocery gift-card for Fortino’s/No Frills. There is one prize for each of the three sessions. The rooms are all in accessible locations, and childcare costs are eligible for reimbursement.
The survey gives you the chance to provide input into the things you’d like to see introduced or improved in the new Collective Agreement. Members of the bargaining teams will be on hand to chat about items you’d like to see reflected in the Collective Agreement. If you can’t attend one of these events, the e-link to the survey will also be sent on February 6th, and the survey will remain open until March 6th.
In solidarity,
Your elected Unit 1 and Unit 3 Bargaining Teams 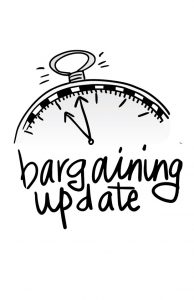