As 2018 draws to a close, many of us are taking a well-earned break from work to spend time with family. While we do, let’s not forget the members of our union who work over the holidays to look after our loved ones and keep our communities strong while we’re away.

Let us also reflect with pride on our efforts as a union over the past year and steel ourselves for the challenges ahead. In 2018, CUPE Ontario members played a leading role in ousting the Wynne Liberals and electing the strongest NDP caucus in a generation. But there’s no sugar-coating it–we’re looking at a hard road ahead under the Ford Conservatives.

They’ve wasted little time implementing their far-right agenda. Rolling back the gains for working families made under Bill 148. Undermining the free collective bargaining process by forcing CUPE 3903 members and power workers back to work. Passing discriminatory laws targeting trans people, taking our sex-ed curriculum back to the 90s, attacking the rights of Franco-Ontarians, and much, much more.

And even though Canadian corporate tax rates are among the world’s lowest, the Ford Conservatives, like the Wynne and Trudeau Liberals, have refused to address the main cause of underfunding for the public services we all depend on: criminally low taxes on the wealthy that perpetuate inequality in our society.

But there is still hope. CUPE members are rising up to resist this far-right resurgence. Whether going on strike against two-tier contracts and precarious work, mobilizing our members in elections, fighting the Ford austerity agenda at Queen’s Park, stemming the rising tide of racism in our communities, defending our pensions, pushing minimum care standards for long-term care residents, or standing in solidarity with our allies in the labour movement, we must never forget that WE are the people and the only way the far-right wins is if the people do nothing.

2019 will bring fresh challenges but also the chance to elect new leaders in the Canadian federal election. As CUPE Ontario members, we resolve to continue standing on the front lines in defence of the public services our parents and grandparents left to us, while making new gains for working people and their families.

Wishing you a safe and joyous holiday season and a Happy New Year. 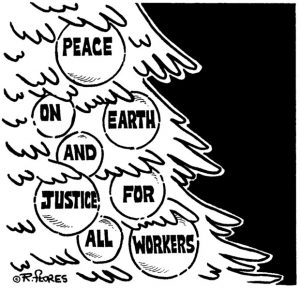