This year’s Annual General Meeting, or AGM, will be held on April 8th, 2021 at 12:00 noon via Zoom. A secure link has or will be sent to you directly via your McMaster email address. Immediately following the conclusion of the AGM, a General Membership Meeting will be held.

There is a single agenda item at the AGM- the election of all executive positions and a 3-year trustee. A full description of each of these positions can be found in our bylaws. Addition business outside of the election will occur at the GMM following the AGM.

A summary from last year’s AGM can be found here.

The agenda for this year’s AGM is available here

The agenda for the GMM is available here.

Statements for candidates running for executive spots can be found here.

The Bylaws committee is proposing the following change to section 4(B)iii of the CUPE 3906 bylaws, which concerns how elections are run. This change involves adding the term “3906” to the paragraph, to clarify that the emails are not coming from CUPE National, and was requested by the national office.

Every candidate shall be permitted to distribute one handbill (8.5”x 11” coloured paper, black ink, double sided) to the department addresses of union members. Candidates will also be permitted to submit one version of a digital campaign material to be sent out through CUPE 3906’s regular email blasts.

Due to the ongoing COVID-19 pandemic, elections will occur online via Election Runner. This requires a slight variation from the election process that is outlined in our bylaws. We have received permission from CUPE National to deviate from these bylaws in order to facilitate an election in a timely manner.

Below is an overview of the amended elections process:

1) April 8th online Annual General Membership meeting
2) Folks can (self) nominate for any executive (or trustee) positions in advance of the meeting by e-mailing staff@cupe3906.org,but have until up to the meeting itself when the position is opened for nominations to do so. Nominations are then closed.
3) Those candidates present at meeting have up to 2 minutes to address the meeting. Candidates do not need to be present at the meeting to run for a position, but those not present will obviously be unable to address the meeting.
4) All candidates can submit 250 word (maximum) statement to be included on election website. Deadline is 1 hour after the conclusion of the meeting
5) Candidates can run for unlimited number of positions, can only hold one
6) Elections and their nominations will proceed in the following order:
This is the ‘priority’ order, for lack of a better term. The trustee is to be elected as last position
7) A candidate requires a majority of votes to be elected. We are using a ranked-choice ballot to facilitate this. The full process of a ranked-choice ballot is described here, but in short, voters rank all candidates (1 for most preferred, 2 for next preference, etc) and if no candidate has a majority of votes after the election, Election Runner drops the candidate with the fewest votes and redistributes them to the remaining candidates in an ‘instant runoff election’ until one candidate has secured a majority of votes. A useful image can be found at the bottom of this page.
8) A candidate winning their first election automatically ineligible for subsequent election. If they win that seat, it is declared vacant and new election held at next GMM (ie/ if you win president, you cannot hold an additional seat and any other wins are immediately vacated per the ‘priority’ order listed above in point 6)
9) Up to 3 overall election scrutineers will selected at AGM.
10) Voting begins as soon as all candidate statements are received, ballot created and sent (approx 5 pm on April 8)
11) All members (regardless of Unit) will be sent the same ballot and entitled to vote for all positions. A separate unit-specific ballot will be sent to elect each of the Chief Stewards
12) Balloting continues for approx 72 hours, ending at 5 pm on Sunday April 11
13) Results confirmed by staff, any trustees, and scrutineers on Monday April 12, time TBA. Results announced thereafter 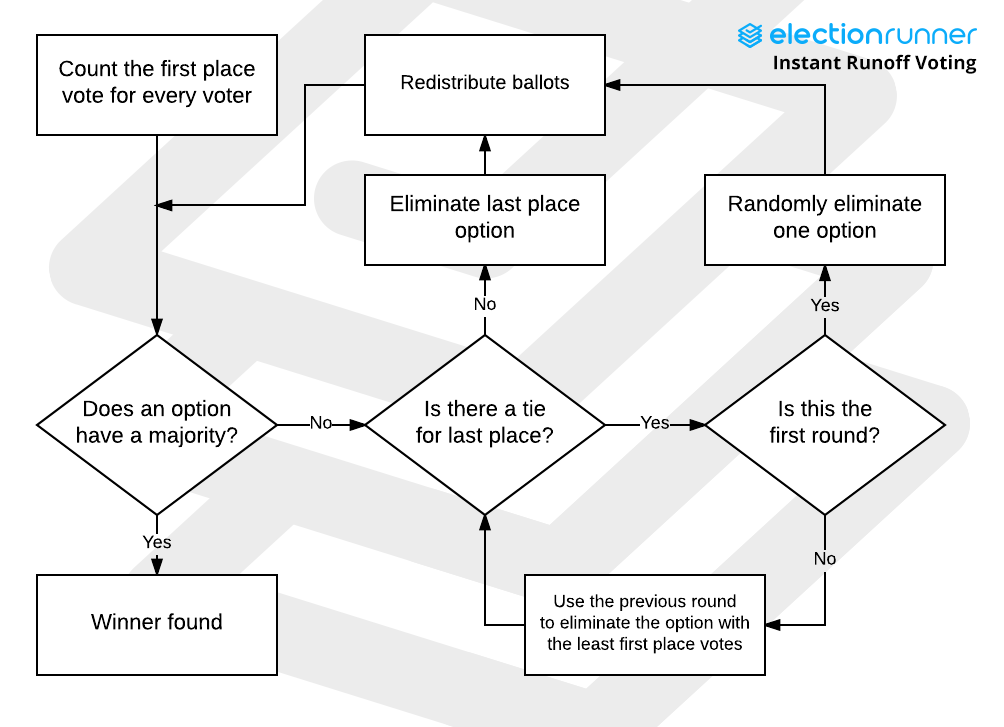